The Day of Reckoning for the Unification Church

"Silence in the face of evil is itself evil.
God will not hold us guiltless.
Not to speak is to speak.
Not to act is to act."
Dietrich Bonhoeffer

God expected the Papacy and Rome to completely unite and unselfishly build the unified world left unaccomplished at the time of Jesus.

However, the Papacy also did not realize the significance of its mission and often used its power for its own glory. There was abuse and corruption in the Church and it departed from the will and expectation of God. The dignity of the Papacy fell.

In reaction, humanism arose, and Protestantism called for reformation of the Church. Instead of heeding the call, the Papacy and the Roman authorities increased their persecution of the reformers.

Corruption in the Unification Church

In the USA, we just experienced the shock of discovering that our national pastor for the last three years, In Jin Moon, has been carrying on adulterous affairs with two men for the last seven years and just had a baby out of wedlock with her latest lover, band member and lounge lizard Ben Lorentzen, all while being married to someone else. During that time, they have appeared together in New York, Las Vegas, Hawaii, Seattle, San Francisco and Los Angeles.

In Jin Moon created a monopoly for her style of church leadership, requiring local churches to shut down or merge so that most Unification Churches in the whole USA listen to a simulcast of her giving a sermon and the band playing on a Sunday morning, over the strongly vocalized objections of local church members and leaders. Those who did not comply with her authoritarian mandates were dismissed from the ministry. Sardonic humor locally nicknamed the Lovin’ Life Ministries’ church services “mushroom church” because all you do is sit passively in the dark and are fed bovine excrement.

No longer does the Unification Church promote the teachings of its founder, the Divine Principle, from the pulpit and at its workshops. Instead, it promotes a mixture of psychobabble and loyalty to the Moon family.

The age of totalitarian church leadership has to end. It is time to stand up for the inviolability of the church and the non-profit corporation, so that Korean leaders cannot just raid the church safes and bank accounts and sell off real estate for personal gain without regard to the members who worked for decades to build the foundation for the mission of the church and the community of faith.

So excuse me for being more concerned with finding out the truth than accentuating the positive. You can shelter your children from the truth if you want, but they will find out anyway. Not only that, but the church leadership has lied and stonewalled until confronted with the irrefutable truth in the form of a birth certificate of the pastor’s bastard child. When the affair was exposed, Mrs. Hak Ja Han Moon asked In Jin Moon to resign. The official explanation was that she resigned for “health reasons”. What kind of fools do you take us for?

Hyung Jin Moon, the youngest son of Rev. Sun Myung Moon has now been appointed as the leader of the American church, while still the head of the church in Korea and the world. Is it not time to delegate? Are we still going to be subjected to mushroom church in America, with one maximum leader preaching from a distant pulpit while the rest of us sit in the dark?

We are seeing the public spectacle of FFWPU vs UCI being fought out in the courts. The FFWPU faction of Kook Jin Moon, In Jin Moon and Hak Ja Han Moon is faced off against the UCI faction of Hyun Jin Moon. Court documents allege widespread theft and misappropriation of public resources for private profit. It is a disgrace of international proportions when the church founder’s family is fighting over money like the medieval House of Borgia or a mafia crime family.

Are the assets of the Unification Church being used to enrich the Moon family, many of whom have nothing to do with the church? Are they intended to enrich the faithful Korean lieutenants of the church’s founder? The assets of the church do not belong to individuals of any one family; they belong to the non-profits themselves and the worldwide Unification community. I have been a contributing member of the Unification Church for 35 years, and I do not consider anyone above the law, or above the need for accountability, transparency, and scrutiny.

The final illness and death of the founder of the Unification Church, Rev. Sun Myung Moon, on September 3rd, 2012, marks the start of a new era for the church. While the man lay on his deathbed, and during the time leading up to the funeral, the family battled furiously. The Kook Jin faction refused to allow the eldest living son, Hyun Jin Moon, to see his father on his deathbed. When he showed up to see his father in the hospital, he stayed a few minutes before being discovered and ushered out. At the funeral, the opposing faction blocked Hyun Jin Moon from paying his respects to his father without his bodyguards. What kind of family needs bodyguards to see their father alone?

The funeral of Rev. Moon was grandiose, but more in keeping with the style of a Communist dictator than the celebratory commemoration of his life and transition to spirit world as he taught us.

From the days of John the Baptist until now, the kingdom of heaven has been subjected to violence, and violent people have been raiding it.

We need to decide going forward how we are going to govern ourselves and how resources are going to be used, especially since our national pastor in the USA has been carrying on this affair using our donation money to fund her escapades.

What steps must be taken to restore trust among the global membership of the Unification Church, and even attract former members back into the fold? Heaven knows, even new members could come along!

It is time for the worldwide Unification Church community to realize that the future is in our own hands, and we have the power to form our own government of the people, by the people, for the people. The current leadership needs to realize that as they continue to bicker over resources, those resources do not belong to them at all.

I would like to conclude with the words Rev. Moon gave at the Washington Monument 36 years ago today:

"My dear brethren who long for unity, this is the place of commitment, the moment of decision. If you are willing to give your sweat, your blood, and your very lives to the call of God, then in this sacred moment before heaven and earth and before all mankind, let us shout it out. We know we can build the Kingdom of God here on earth, in His power, and with our own hands." 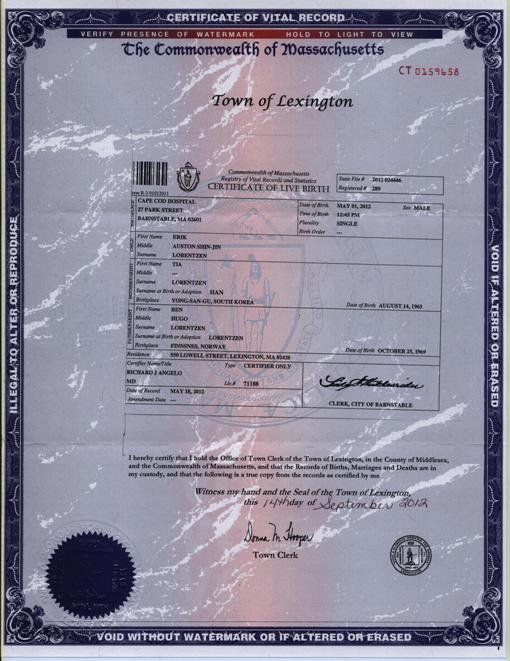 Birth certificate of Erik Auston Shin-Jin Lorentzen, illegitimate child of In Jin Tatiana Moon, the pastor of the Unification Church of America since 2008 and her lover, Ben Lorentzen.
Click to enlarge. Look for the detail in the paper, such as the fibers, the dot printing of VOID when copied. This is a 600 dot per inch scan.